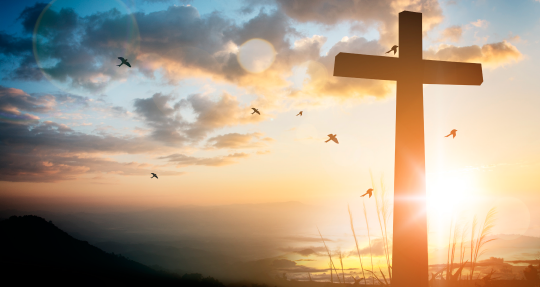 1 But at daybreak on the first day of the week they took the spices they had prepared and went to the tomb. 2They found the stone rolled away from the tomb; 3but when they entered, they did not find the body of the Lord Jesus. 4While they were puzzling over this, behold, two men in dazzling garments appeared to them. 5They were terrified and bowed their faces to the ground. They said to them, “Why do you seek the living one among the dead? 6He is not here, but he has been raised. Remember what he said to you while he was still in Galilee, 7that the Son of Man must be handed over to sinners and be crucified, and rise on the third day.” 8And they remembered his words 9 Then they returned from the tomb and announced all these things to the eleven and to all the others. 10The women were Mary Magdalene, Joanna, and Mary the mother of James; the others who accompanied them also told this to the apostles, 11but their story seemed like nonsense and they did not believe them. 12 But Peter got up and ran to the tomb, bent down, and saw the burial cloths alone; then he went home amazed at what had happened.

The Easter story confronts us with the themes of …

The question, “Why do you seek the living one among the dead?”, challenges us to be open…

to profound and unexpected change.

Sometimes the change that we experience is deliberately sought, coming gradually as simply a matter of due course. Sometimes it’s not, and we find it suddenly forced directly upon us. However, all change can be a powerful force for growth and transformation. The key seems to be how best to receive it and respond.

The challenging question remains for us to respond to…”Why do you seek the living one among the dead?”

In addition, listen to our Easter podcast (play below) featuring CHI colleagues sharing what gives them hope.