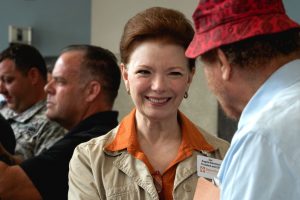 In this episode of the Mission Innovation Podcast, we are in conversation with Angela Blanchard. Angela is President Emerita of BakerRipley, is a globally recognized expert practitioner in community development, disaster recovery, and effective long-term integration for immigrants and refugees. Blanchard’s breakthrough strategies have successfully revitalized neighborhoods by leveraging Houston’s diversity, while providing a powerful model for cities across the globe facing the complex challenges of community transformation.

Blanchard’s genuine reverence for people and her unique ability to bring them together in unprecedented ways have played a pivotal role in the growth and impact of BakerRipley Her innovative, strength-based framework—Appreciative Community Building—has set the new standard for integrating diverse populations into thriving communities. The success of her approach in the country’s fastest-growing, most ethnically diverse city positions Blanchard as a visionary leader for evolutionary change. She has been profiled in The New York Times, The Wall Street Journal, The Atlantic, Fast Company, CNN, NPR, Associated Press, among many others. She was recently appointed as a Nonresident Senior Fellow in the Centennial Scholar Initiative at the Brookings Institution in Washington, D.C.