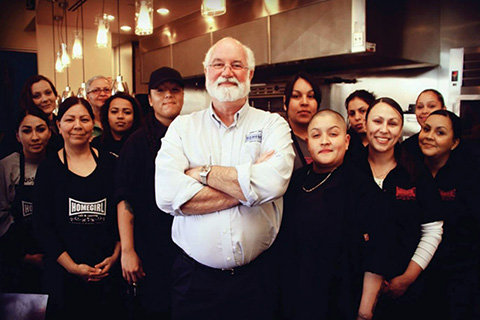 Gregory Boyle is the founder of Homeboy Industries, the largest gang-intervention, rehabilitation, and re-entry program in the world. Father Greg, an American Roman Catholic priest of the Jesuit order, witnessed the devastating impact of gang violence on his Los Angeles community during the so-called “decade of death” that began in the late 1980s and peaked at 1,000 gang-related killings in 1992.  In 1986, Fr. Boyle was appointed pastor of Dolores Mission Church, a Jesuit parish in the Boyle Heights neighborhood of East Los Angeles that was then the poorest Catholic church in the city. At the time, the church sat between two large public housing projects and amid the territories of numerous gangs. He is also the author of the 2010 New York Times-bestseller Tattoos on the Heart: The Power of Boundless Compassion and the 2017 Los Angeles Times-bestseller Barking to the Choir: The Power of Radical Kinship. Fr. Boyle has received the California Peace Prize and been inducted into the California Hall of Fame. In 2014, the White House named him a Champion of Change. We are so pleased to be in conversation with Greg Boyle in this episode.